What do saltwater fish eat

About 220 species of fish live in the North Sea. One fish lives very differently from the other. Herring and mackerel, for example, are plankton eaters, which are often found just below the surface of the sea. Sole, plaice and most shark and ray species are bottom fish. They hunt ground animals such as worms, crabs and prawns. And then there are the real predators: marine fish that hunt other marine fish: cod and sea bass, for example. 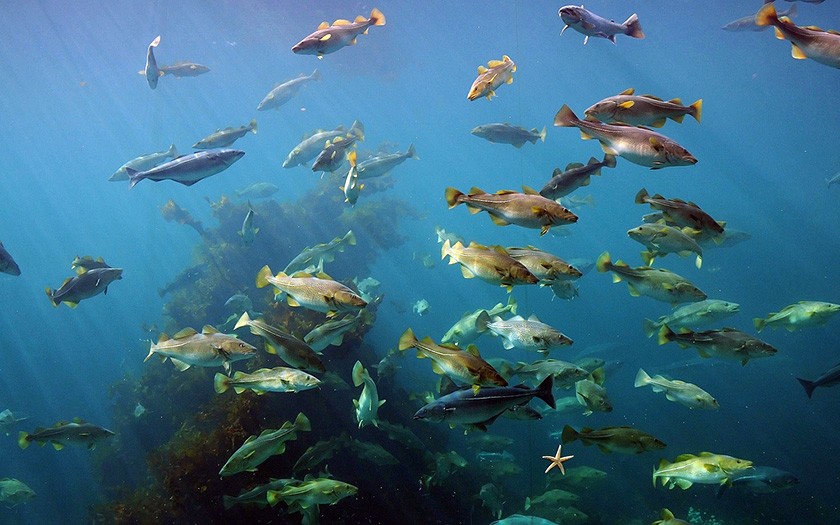 All fish swim, but not in the same way. Stayers like mackerel, herring and sprat can swim quite quickly for a long time. Cod, haddock, sole, and plaice are sprinters: they can only swim fast for a short time. You can see this difference in the muscles. In the case of the standing, the muscles are well supplied with blood and therefore red. Sprinters have white muscles that are quickly exhausted.

Herring, mackerel and sprat usually live in large schools in the upper water layer. Their diet consists of plankton and small fish. These inhabitants of the open sea are called pelagic fish. They often have typical colors in order not to attract attention: a green-blue back and a silver-white belly. The fish is difficult to see for seabirds in the green-blue surface water. From below, the animal becomes invisible to predatory fish against the bright light. They swim in schools in order to be better protected against predatory fish and because swimming in schools saves energy. In a school, the fish uses the eddies in the water current that were created by the previous swimmer.

Bottom fish such as plaice and sole live on the seabed and feed on bottom animals and small fish species. To be better camouflaged, they often wear a color pattern that matches the seabed on site. Turbot can even change their color to match their surroundings! Bottom fish also like to bury themselves.

Predatory fish eat smaller fish. They hunt both on the ground (cod and haddock) and near the surface (garfish, sea bass and whiting). They are fast swimmers with large mouths and often sharp, backward-facing teeth. 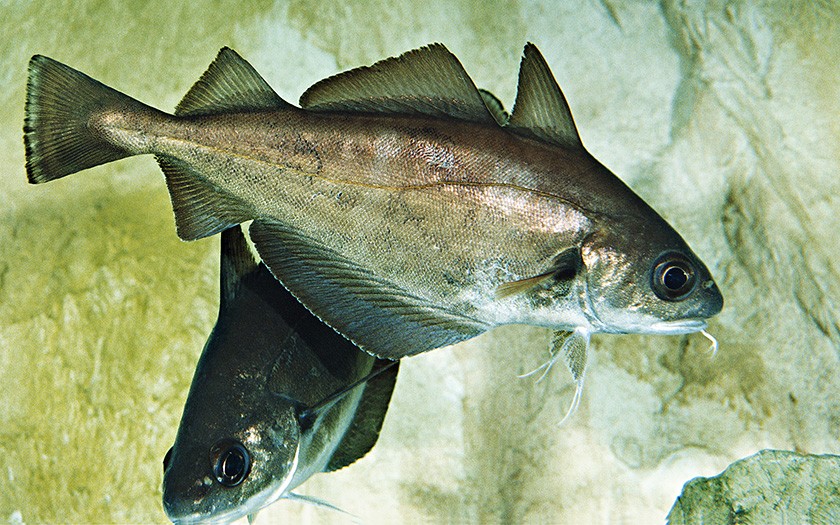 Fish often lay many eggs, especially the species that float freely in the water. A cod lays up to a million eggs a year. Most fish eggs and larvae are eaten by other animals. In herring and sand eel, the eggs are deposited on the seabed. These are less sensitive, so these fish can get by with fewer eggs. The herring produces 30,000 eggs a year. Other species, such as dogfish and stingrays, lay even fewer eggs, around 140 eggs.

Fish have fixed places for their reproduction. Herring, for example, only set their eggs (roe) on gravel or mussel beds, e.g. off the English and Scottish coasts. After the males have fertilized the eggs with seeds (milk), the fish migrate to the northern and central North Sea. Sand eels lay their eggs in the sand.

The eggs and larvae of herring, cod, flatfish and many other species belong to the animal plankton. They live in the upper water layers of the sea and mainly eat copepods. When they get bigger, they can swim against the current and then no longer belong to the plankton. Species like herring and sprat then eat plankton themselves. It is not uncommon for them to eat the larvae of their own species.

The area where the females spawn and the males fertilize the eggs is called the spawning ground. Fish larvae grow best in marine areas with a large abundance of food: the nurseries. The spawning grounds are located in such a way that the larvae land with the currents in a nursery. The difference between good and bad years for fish may be due to different flow patterns in the water. Coastal waters such as the Wadden Sea are nurseries or spawning areas for some fish species that occur in the North Sea. Herring, sandeel, cod and plaice spawn a long way offshore. Your nurseries are right off the coast and in the Wadden Sea.

Marine fish: eat and be eaten

Fish are not the only animals that live in the North Sea. There is a wide variety of plants and animals in the sea. All marine life is interdependent: some are food for others. Phytoplankton forms the basis for most of the life in the sea. The phytoplankton is eaten by zooplankton such as copepods and larvae of bottom animals and fish. This zooplankton is eaten by all sorts of bottom animals and small fish, such as herring and sprats, which in turn are on the menu of larger fish such as cod and haddock. The fish are the prey for sea birds, marine mammals and humans. This system of eating and being eaten is called the food chain. In reality, the food chain is more complicated than described here. This is how zooplankton eats each other: fish larvae eat copepods. And young fish eat different prey than the adult fish. 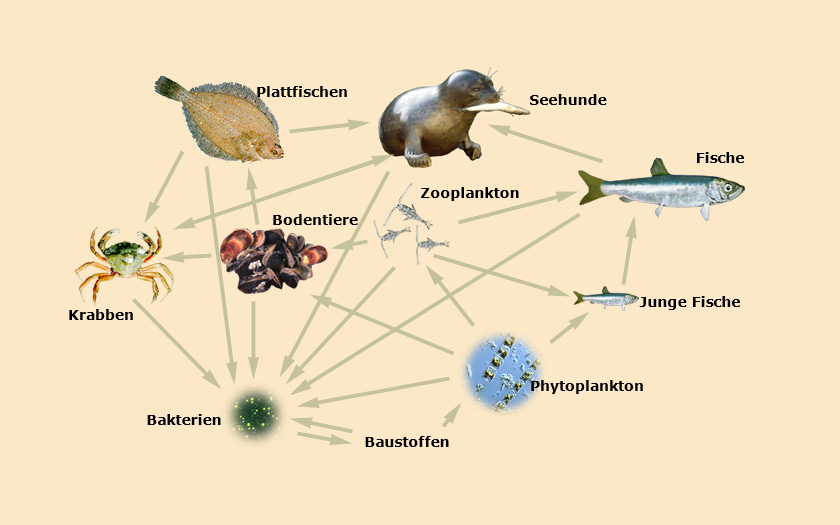 Marine fishing has a huge impact on fish. The fact that predatory fish (cod) are caught increases the chances of survival for their prey (herring). But also rare species that are of no interest to trade are influenced by fishing - often not for the better. Several species of rays and sharks have all but disappeared from the North Sea because they unfortunately got entangled in the nets of the fishing fleet. Poorly managed fish stocks have shrunk enormously over the past fifty years. Examples are bluefin tuna and swordfish. Herring and sole have had a particularly difficult time in the North Sea. Strict fishing regulations have led to a recovery. This has not yet been achieved with cod.

The increased input of nutrients, especially in coastal waters and in the intertidal zone, also has a major impact on fish populations. On the one hand, this can have positive effects: more nutrients, more plankton, more young fish that grows quickly. On the other hand, an algal bloom causes a lack of oxygen and thus difficulties for the fish fauna. The pollution of sea water by a variety of toxins is also detrimental. Fish larvae do not survive an oil spill or a large amount of pesticides, and the adult fish becomes sick from poison. 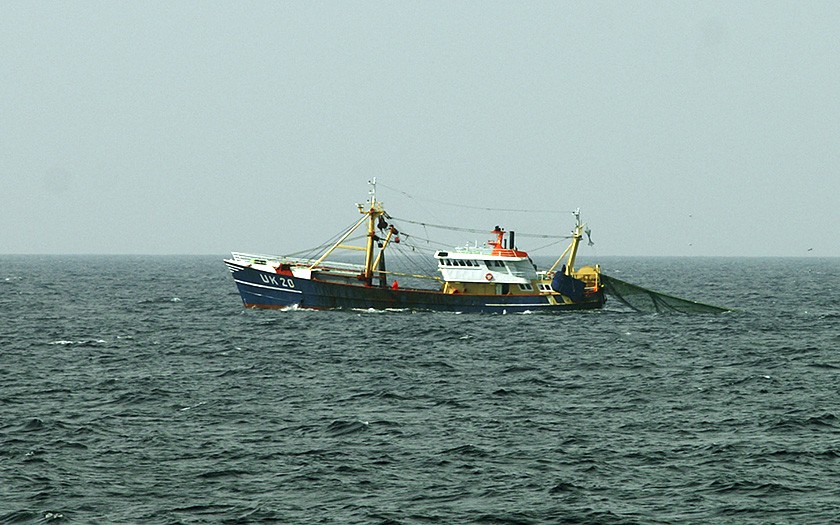