In 1976, chimpanzee researcher Jane Goodall wrote a letter to her family about a "brutal murder" that had taken place in Gombe, Tanzania: a chimpanzee and her daughter had attacked another female monkey, hit her, and then her baby, who was only three weeks old snatched away. With a targeted bite in the skull, the females killed the young animal and then partially ate it up. The Duo Fatale was observed three times between 1975 and 1976 doing such cannibalistic activity, in three other cases they failed to attack - also because Goodall himself threw sticks and stones at them and thus prevented the child murder. Only when both animals were pregnant again did they stop their murderous hustle and bustle.

Violence is not uncommon in chimpanzees

Behavioral scientist Goodall was more than shocked by the duo. Violence in chimpanzees is not uncommon, but most of the time it comes from the males. High-ranking males beat and rape the females of their own kin in order to bind them to themselves, and chimpanzees from rival groups wage real wars against each other. The males also do not stop at killing children if such an act secures their position or gives them advantages.

Female chimpanzees, however, are generally considered to be less violent. Except for the murderous mother-daughter team, not a single case was known in which the aggression against a young animal had originated from a female. So Goodall couldn't explain the behavior. For a long time, the cannibalistic attacks by the two chimpanzees were considered by primate researchers to be a pathological aberration of two individual animals.

Until February 3rd of last year. Simon Townsend and Katie Slocombe from Stanford University were at their observation post in the depths of the Budongo Forest in Uganda when they heard high-pitched screams. They came from a female chimpanzee who was attacked by six females of the local Sonso chimpanzee clan. The animals hit and kicked their victim, who crouched protectively over his cub that was born only a few days ago. Other primates came and watched the scene, screaming and drumming with sticks. An old male chimpanzee tried in vain several times to separate the opponents. After about ten minutes, the alpha female Nambi dragged the cub out of his mother's arms.

But then Nambi was also attacked - another female wanted the baby. After a short fight, the female Zimba finally got the upper hand: she bit into the head of the baby and he died immediately. One of the standing by males hit the murderess hard in the face, another chased her away. The researchers found the dead infant a little later in the bushes [1].

Four months later, the researchers heard screams again. When they arrived, they discovered an injured female chimpanzee who had recently given birth to a cub. Along a trail of blood, they finally found what was left of their offspring: part of a small hand, a piece of the jaw.

Although Slocombe and her team had not been able to observe what had happened here, the scientists were able to quickly rule out that the infant had fallen victim to foreign chimpanzee clans or a male: the animals in question were over 800 meters away. Here, too, a female must have bitten - as probably also in 2004, when the researchers discovered Nambi and Zimba with a dead baby. The injured mother crouched a short distance away while the two chimpanzees examined the corpse for an hour and passed it back and forth.

Female chimpanzees, that much is certain, are anything but always peaceful - they too can use massive amounts of force. But for what reason? In contrast to males, female chimpanzees rarely fight for a ranking. Each animal occupies a certain territory in which it searches for food and chooses its partner. There are seldom conflicts here.

But in the last few years the Sonso clan has become increasingly tight: since 2001, a total of 13 foreign females have immigrated to the group. Sometimes they brought their own offspring. There are now three females for one male. The clan size has almost doubled since 1996 from 42 to 75 animals. At the same time, the few males fail to expand the territory. For the females this means an unusually strong competition, both for food and for sexual partners. Every new young animal is a danger to them - especially if it comes from an immigrant. Two of the three observed infanticide also concerned animals that had moved in.

As seldom as child killings by female chimpanzees have been observed so far, many behaviors suggest that primate mothers are well aware of the danger to their offspring and specifically try to avoid unnecessary dangers. For example, Japanese researchers discovered in the 1990s that pregnant chimpanzees leave the group shortly before giving birth. When they return, they spend a remarkable amount of time in the company of males - perhaps, as the anthropologist Martin Muller of Boston University suspects, in order to avoid being alone with several female competitors [2].

One thing is certain, however: the myth of the opposition between peaceful and cooperative females on the one hand and aggressive and violent males on the other can no longer be upheld. When it comes to killing, chimpanzees do not have the previously assumed gender preference. 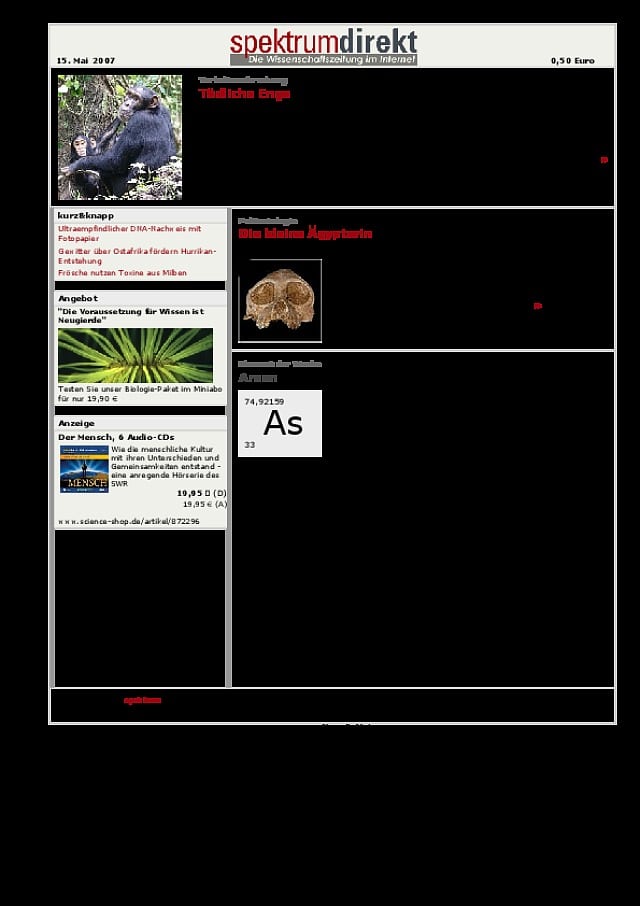