Who is currently the most underrated weirdo

Social psychologist on political conflicts: "The danger was underestimated" 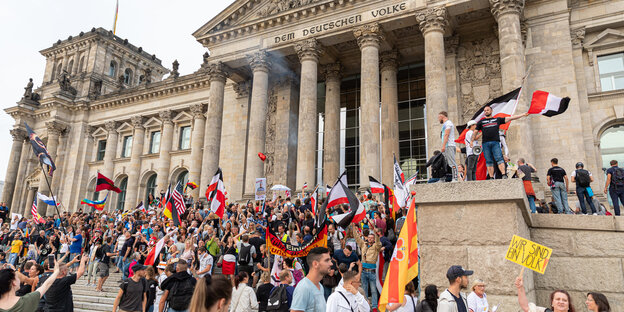 Because you don't know what you're doing? Photo: picture alliance / dpa

taz on the weekend:Mr. Zick, how serious are our social conflicts in connection with the corona crisis at the moment?

Andreas Zick: We did not get into this crisis without conflict. Even before the corona crisis, there was a stronger connection between anti-democratic orientations and approval of violence, which also has an impact in the crisis. In addition, there were increasing divisions, which were shown, for example, in the misanthropic resentment against minorities, public officials and other groups.

This has led to the formation of new anti-democratic communities - for example to an increase in right-wing belief in conspiracies - some of which have become radicalized, while, conversely, others' trust in democracy has grown even further. In addition to this political polarization, there are also economic and social upheavals, which increase in the course of crises and pandemics and lead to increased inequality. In this respect, we are still facing further conflicts, including the actual value conflicts.

When the social conflicts break out, is it actually primarily about economic distribution struggles, or does political communication or “relationship level” perhaps even play a bigger role? And what went wrong here?

From the perspective of conflict research, it always becomes problematic when conflicts can no longer be regulated constructively. This can apply to distribution conflicts, which are currently intensifying for some parts of society, while these people hardly have a political voice. But this also applies to the formation of groups with a nationally colored, radical identity, which these groups try very destructively to enforce.

born 1962, is a social psychologist, professor of conflict research and head of the Institute for Interdisciplinary Research on Conflict and Violence (IKG) at Bielefeld University. Among other things, he is a co-author of the “Mitte Study” by the University of Bielefeld (2019), which examines right-wing extremist attitudes in Germany.

In a pandemic, however, it is very difficult for politicians to preventively avoid a destructive conflict resolution. It is important here that the citizens adhere to the rules out of their own conviction; informed consent is required, not authoritarian obedience. Politicians have sometimes made mistakes here, for example by asking very stereotypically questions about identifying risk groups.

If you say that the actual value conflicts are still ahead of us: Do we have to endure the conflicts between different social groups, such as those that emerged in the Berlin demonstrations against the corona ordinances, to a certain extent? Or should we actively oppose them?

Top politics have long upheld the aspect of freedom of expression. I would say the debate has to go much deeper. Because the crucial question for me is what exactly we as a society have to distance ourselves from here.

In the case of the cynically so-called hygiene demonstrations, one should have pointed out much more decisively from the start that there are massively racist, stereotypical ideas being propagated that only work through common enemy images, such as political and scientific hostility or anti-Semitism. With a view to these enemy images, one can then consider what kind of society the demonstrators actually want to enforce. And here more moral courage should stir.

How can the “unholy alliance” between moderate, perhaps even more left, concerned and confused citizens and openly right-wing extremists be dissolved again?

We have to look behind the propaganda and populism here: Who are the driving forces, and what does their protest want? Does he really want to create freedoms, or does he want to enforce another form of society? Here we can reach the limit of the tolerance necessary in a democracy, for example when it goes against human dignity. At the same time, there is a need for moderating bodies and institutions that the people on the fringes of such protest movements must try to reach.

I do not yet see such bodies - from politics and civil society - and suitable places for dialogue. Here, the risk was systematically underestimated that people from the middle could become radicalized through such movements. We often consider ourselves and others to be more tolerant than we are. A crucial discrepancy lies in the fact that, according to our studies, although 28 percent from the middle of society are open to new-right, anti-democratic ideologies, 80 percent of them claim to be convinced democrats at the same time.

So have we learned nothing from all those years of intense discussion about right-wing populism, or do we just have to understand the nature of democracy better? But is that an option for society at large?

“Broad society” is a good keyword: We have to ask ourselves whether the idea of ​​a norm-balancing center still works. We have reduced the proportion of civic education in schools, but we need responsible citizens, especially in such conflict situations. Instead, hate and violence are increasingly legitimized among the broader population in the middle. But we ignore these facts.

What can each individual, but also politics, contribute to dealing constructively with these conflicts?

Politicians must finally invest again in the systematically reduced area of ​​political education and strengthen civil society engagement, especially in the municipalities. Because this is where informed, responsible citizens emerge: inside and civil courage is learned. If this area lies idle, it is immediately occupied by right-wing identification offers.

We already saw during the migration crisis that there is huge potential for civic engagement in society. But politics has failed in many areas to strengthen and perpetuate this potential.

So could one say that at the moment the established politics are to a certain extent lagging behind the political development of society and have not yet fully understood that a new, more participatory, less technocratic understanding of politics has long been established, which must be protected from being occupied by the right?

Correct. And participation is particularly relevant where people feel they are acting democratically. New forms of co-determination, dialogue and new, open places of debate have to be institutionalized, which have been around for a long time, but in the absence of public structures lose themselves in the obscurity of the Internet. And by the way, this is not a question of generations or a political direction, but one of the fundamental understanding of politics.