Why are American comics so expensive

In America, "Action Comics" No. 1, the first publication with Superman, was auctioned for $ 317,000 - a record. But the magazine, which originally sold millions of times for ten cents, is the incunabula of superhero comics.

The record price for a comic book has stood at $ 317,000 since last weekend, or around a quarter of a million euros. At first glance, that is an astonishing amount, because, as is now being reported everywhere, there are still around a hundred copies of “Action Comics” No. 1, the issue that has been auctioned at such a high price (and I bet my head that there are far more because almost a million copies of the magazine were sold in 1938, and even if you consider poor paper quality, time and parental naivety as important factors that favor the destruction of comics, more than a tenth of a thousandth of the original edition should have survived) . On the other hand, it is an - here you can not avoid the expression - incunabula of comic history. No, it is THE incunable of comic history, because after “Action Comics” No. 1 everything was different than before. 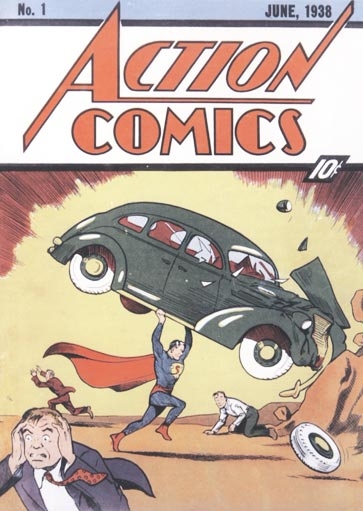 Most of all, after that there was Superman. Its debut is told in "Action Comics" No. 1. That it came about at all was a coincidence, because Jerry Siegel and Joe Shuster, the two young creators of "Superman", had offered their idea several times over the years and were in the process of preparing a publication as a comic strip when the makers of "Action Comics" were desperately looking for a cover story for their first issue. Superman was recommended to them and, in their distress, they accepted the very fantastic story of the alien baby who was raised on a small farm by American parents and who, as an adult, hides his superhuman powers behind the mask of a staid reporter. Siegel and Shuster worked the pictures, which were already in the comic strip landscape format, into the high magazine format in the greatest hectic pace. And Shuster, the draftsman in the author duo, also managed to make a cover picture for “Action Comics”: Superman heaves a crook limousine into the air and hammers it against a rock. Nobody had seen anything like it before. The age of superheroes had begun.

The readers understood this immediately and bought the magazine like crazy. Because not only the cover but also the thirteen Superman comic pages offered something completely new. It was not the principle of secret identity itself that was revolutionary, it was known for a long time from pulp magazines or radio series such as “The Shadow”. But the superpowers of Superman were different from those of Tarzan, Conan or The Phantom, all of which remained within the scope of what training with a little imagination can do in a person.

The success of Superman not only ensured that the series continued; just two years later there was another series of magazines, this time named directly after Superman, in addition to “Action Comics” - also with a sensational edition. And the imitators were hardly less numerous. I'm just saying Batman, Captain America, Captain Marvel, Submariner, Daredevil.

All of this, the myth of superheroes, makes the number one “Action Comics”. It is to comic books what the Gutenberg Bible is to printed books: the whole genre was born. Not that there weren't any comic books before. But they were only moderately successful, and rarely did they feature specially drawn stories - let alone a whole new type of hero. Without “Action Comics” No. 1 there would be no comic book culture, just as there would be no modern book culture without Gutenberg. That both could have developed differently? No question. But that's not how it happened.

Now, individual Gutenberg Bibles are still more expensive than “Action Comics” No. 1. The last Gutenberg Bible was also sold several years ago; at that time the equivalent of around five million euros was paid. In relation to age and size, however, the Superman booklet of the Bible is already quite hot on the heels. However, it should not be overlooked that the current $ 317,000 was paid for a booklet that is in fairly perfect condition and similarly flawless copies were valued at more than $ 200,000 three years ago. It is remarkable, however, that the previous owner of the booklet, which has now been sold, acquired it as an antiquarian half a century ago. Hardly any provenance of the known specimens can be traced back so completely, and of course such long-term careful storage ensures a longer life even for today's fragile penny books of the thirties and forties than when they move from hand to hand or even - horribile dictu! - would be read.

However, this is the perversity of the comic price boom, which seems to be overcoming the economic crisis with ease, as suggested by the results of the comics auction of the Paris auction house Artcurial last Saturday (where the original drawing for the cover of Hergé's “Tintin” album “Die Krabbe with the golden claws ”a price of 372,000 euros and a“ Gaston ”page by André Franquin more than 50,000 euros): Such expensive magazines are no longer read. They are welded, certified and sealed in transparent plastic covers, and you have to believe the assessors' assessments when it comes to the "creamy white" pages or unrestored paper described in the catalog, because as soon as you, the buyer, want to check the thing yourself, it works The guarantee for this state that lies in the seal is lost. I remember a comic book auction a few years ago where I bought one of the rare, if not particularly expensive, notebooks that could be made from Mickey Mouse supplements from the 1960s. The sheets were really wonderfully unbend, and the label on the plastic cover warned me urgently not to open them, as this would invalidate the certification. I didn't buy the booklet to marvel at, but to read it. The loss of value may have been considerable, but in any case the gain in pleasure was greater.

So now somewhere in the United States (there is no publicly documented case of a copy of the first Superman booklet sold abroad) someone sits in front of the small Plexiglas safe with “Action Comics” No. 1 in it and adores the almost perfect copy. Or he is sensible and frees the notebook from its dungeon and does what it was intended for seventy-one years ago: he reads. I know this is naive. In all likelihood, this booklet will never be read again. And its price is explained by the fact that it has not been read for fifty years. But it is precisely this perverse fact that distinguishes comic collectors and comic readers. I prefer the latter.

The magazine that's worth a quarter of a million

In America, "Action Comics" No. 1, the first publication with Superman, was auctioned for $ 317,000 - a record. But the magazine, which originally sold millions of times for ten cents, is the incunabula of superhero comics.

An error has occurred. Please check your entries.