In which direction is air flowing

The direction of air currents in high and low pressure areas 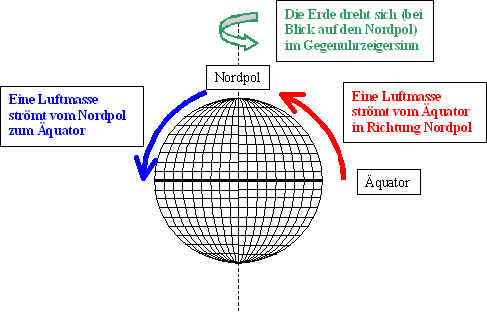 The Air mass flowing to the North Pole participated in the earth's rotation at the equator, covering the circumference of the earth (40,000 km) once in one day. This results in a speed of 40,000 km: (24.60.60 s), i.e. about 500 meters per second. For points further to the north this speed of rotation is much lower, at the north pole itself it is zero.
The air mass retains this speed as it moves north. Consequence: For an observer on earth, the air mass has a "twist" to the east. In other words: the air mass is deflected to the right. In this context one also speaks of the "Coriolis force".
The following sketch shows a close look at the north pole of the earth: 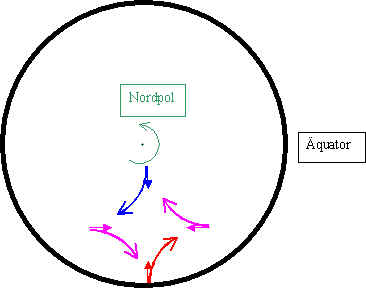 With the appropriate consideration for the mass of air flowing south one comes to the conclusion that it too is deflected to the right from the point of view of an observer on earth. In addition, one can show by further considerations that too Air masses going from east to west or from west to east flock to be diverted to the right.

If one examines the situation for the southern hemisphere of the earth, one finds that the situation there is exactly the opposite: an air mass is deflected to the left.

This has the following consequences for air flows out of an area with high air pressure (high pressure area) and into a low pressure area:

1.) From the Atlantic, a low pressure area stretches across Western Europe 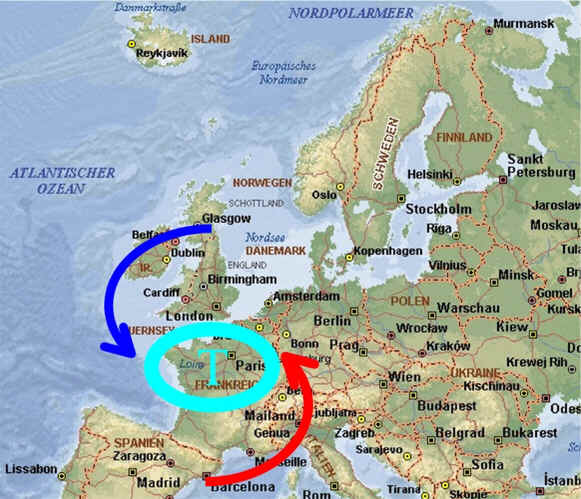 The depression is just above France, with Germany on the front.
Warm air flows into Germany from the south. 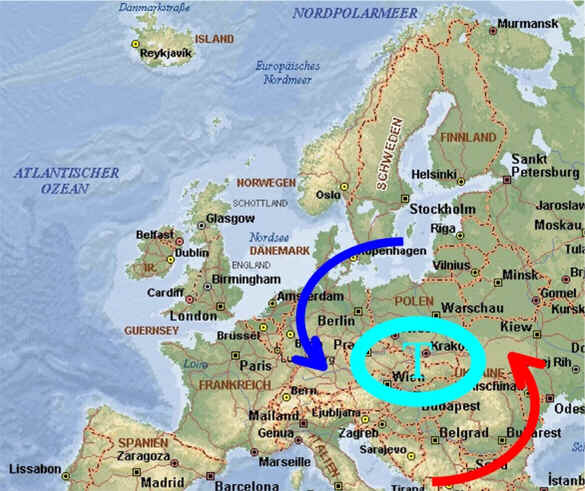 The low pressure area has passed over Germany,
Germany is now on the back.
Cool air flows into Germany from the north.

2.) A high pressure area lies over the south of Scandinavia 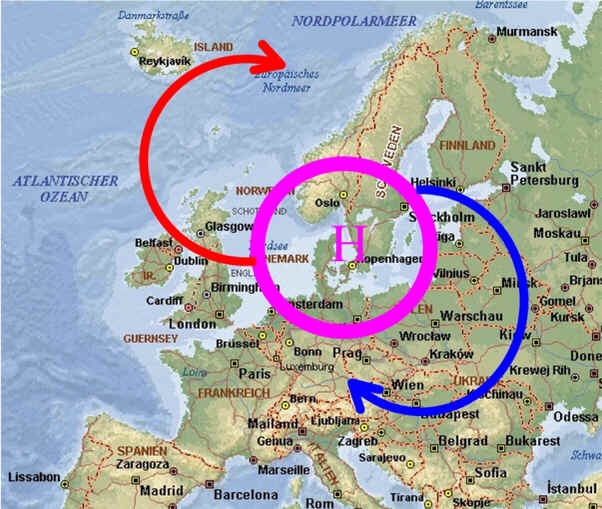 When this weather condition occurs in winter, it is the one with the east wind to Germany
incoming air relatively cold and dry. The north of Scandinavia receives for this
relatively mild air. (See also an example in the picture gallery)
Nothing essential in the situation changes when the high pressure area
a little further east.
If this weather situation sets in in summer, it is to Germany
Air flowing in from the east is relatively warm and dry. Eventually evolves
from this a longer period of good weather.