Finland has an early vote

Finland. In a week, on Sunday, January 28th, the official date for the presidential election will be. But the Finns have been able to vote early since Wednesday. And because the way to the polling station in the sparsely populated north is sometimes a long way, ballot papers and ballot boxes also come to the people by bus.

Official logo of the presidential election

In Finland, too, the president has primarily representative tasks. But unlike in Germany, since 1994 the Finns have been able to elect their head of state directly. Sauli Niinistö has been the incumbent since 2012. He is running for re-election, surveys show that he has good chances, even if the popularity has recently fallen somewhat - more than half of them still want to vote for him. Niinistö belongs to the conservative National Collection Party (Kansallinen Kokoomus) and is also supported by the Finnish Christian Democrats. A president may only hold office for two terms (six years each).

Finnish voters have plenty of choice: eight candidates, three of whom are women. According to Tarja Halonen, Niinistö's predecessor, a woman in office would no longer be a sensation. All candidates are politically active, some for a long time. One of the big questions that is discussed in Finland over and over again is that of NATO membership. Although EU member Finland is working more and more closely with NATO, only Nils Torvalds, candidate of the Swedish People's Party, spoke out in favor of joining during the election campaign. There is currently no majority in favor of it in surveys. Niinistö remained vague on this question. (Voting machine in Swedish or Finnish here). This discussion is often conducted with a view to our neighbor and closest ally Sweden - the situation there is similar.

A domestic political perennial favorite is the compulsory Swedish lessons for Finnish-speaking children. However, only Laura Huhtasaari, candidate of the True Finns or Basic Finns (Perussuomalaiset) actually wants to abolish this obligation. The incumbent stressed that Finland is bilingual and that Swedish is useful in working closely with the other Nordic countries. 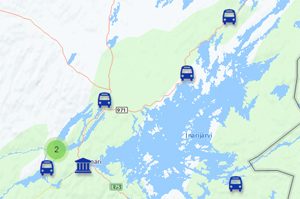 Options around the Inari lake.
Screenshot of the website of the statistics center

The majority of Finland's population lives in the southern part of the country. The big events took place there, and that also shaped the topics. An exception was an event organized by Finnish television (Yle) and the newspaper Kaleva in Oulu, where other questions were then asked, as Yle and Svenska Yle report: It was about the promotion of northern Finnish industry, future rail connections to Norwegian ports and according to Murmansk, the role of the sparsely populated areas in defense and possible aspirations for autonomy by the Sami. And there was a prospect that the Independence Day reception, which is one of the President's duties, would also take place in northern Finland.

Because the distances are long in northern Finland and partly in the east, buses are used as mobile polling stations for early voting (map here). Even a book bus is used for this. Many have made use of these opportunities: According to official information, 26.7 percent of voters in the Lapland constituency have already exercised their rights - in the capital region only 18 percent. The last day of the pre-voting is Tuesday, January 23rd. Those who have not yet made a decision will have to wait until election day.

This entry was posted in Finland, Society, Politics. Set a Bookmark the permalink.
<?