How did theropods carry their weight

Sensational find: paleontologists have discovered the oldest representative of the large predatory dinosaurs in northern Italy - the largest carnivore of the early Jurassic. The fossil of the species baptized Saltriovenator zanellai is almost eight meters long, and this giant probably weighed a ton during its lifetime. The fossil sheds new light on the size development of the predatory dinosaurs, but is also an important link to the evolution of birds.

Whether Tyrannosaurus rex, Allosaurus or Megalosaurus: These two-legged predatory dinosaurs are among the largest representatives of the carnivorous prehistoric lizards. They were up to 15 meters long and weighed more than a ton. Even gigantic herbivores like Brachiosaurus or Brontosaurus were therefore not safe from these predators. So far, however, it was unclear when the giant carnivorous theropods began to grow.

Forgotten in the museum basement

Now a fossil from Lombardy in northern Italy sheds new light on the evolution of the large predatory dinosaurs. The relic, which is around 200 million years old, was discovered in 1996 in a quarry north of Milan. However, because the fossil was embedded deep in the rock, it was left unprocessed for years in the cellar of the Museum of Natural History in Milan. 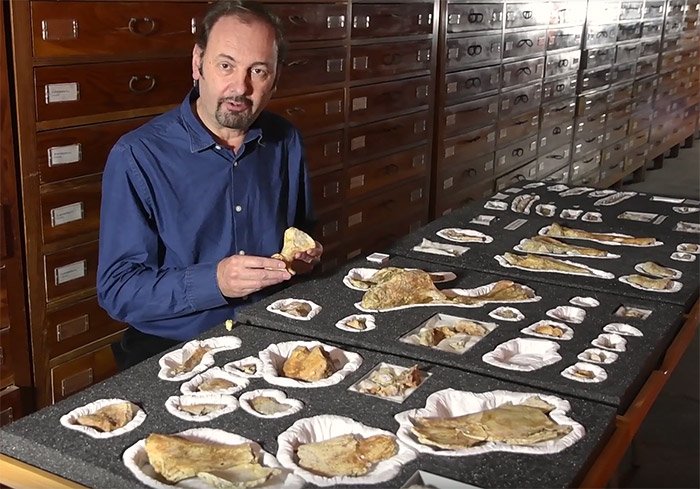 Cristiano Dal Sasso with the bones of the Saltriovenator. © Gabriele Bindellini

It wasn't until 1999 that the fossil was rediscovered, and researchers began using chemical baths to detach the dinosaur bones from the rock. Because the fossil was highly fragmented, it took another eight years to put the skeleton together. Only now does it become clear what an unusual find the Saltriovenator zanellai baptized dinosaurs represent.

The largest carnivore of its time

"Saltriovenator is the largest and heaviest theropod of the early Jurassic," report Cristiano Dal Sasso from the Museum of Natural History in Milan and his colleagues. Because the fossil of this carnivorous dinosaur is 7.50 meters long - and the animal was not even fully grown. “The analysis of the bones shows that Saltriovenator was a still growing young animal,” says Sasso's colleague Simone Maganuco. "In this respect, its enormous size is all the more remarkable."

The paleontologists estimate that this predatory dinosaur must have weighed between 1.2 and 1.6 tons during its lifetime. "This is pushing the emergence of theropods of this weight class forward by around 25 million years," the researchers say. Because fossils of predatory dinosaurs from the early Jurassic are not only very rare, most of them are also significantly smaller than the Saltriovenator.

The early development of such large carnivores allows exciting conclusions to be drawn about the ecology and predator-prey relationships in the early Jurassic. According to this, a kind of "arms race" between the predatory theropods and the herbivorous sauropods could have started even then. In order to be prepared against the large carnivores, larger and larger forms of these dinosaurs formed in the course of this development.

"The spread of larger and relatively massive theropods at such an early stage was probably one of the factors that sparked the gigantic trend among sauropods," say Dal Sasso and his colleagues.

Also exciting: While the later predatory dinosaurs only had three fingers on their clawed front legs, the Saltriovenator still had four fingers. However, only three of them are strong and have long claws. The fourth, outer finger, on the other hand, is shortened. The fossil from the Italian Alps thus proves to be an important link in theropod evolution - and ultimately also for the development of birds, as the researchers report.

"Saltriovenator sheds a whole new light on the evolution of the three-fingered hand of birds," explains Dal Sasso. Because until now it has been disputed which finger bones their wing bones correspond to. While some paleontologists rather suspected that the first finger - quasi the thumb - disappeared in the ancestors of the birds, Saltriovenator now provides evidence for a different scenario. Accordingly, the theropod's fourth finger was first smaller and then completely reduced.

“Saltriovenator's grasping hand fills a crucial gap in the theropod family tree,” says co-author Andrea Cau from the Geology Museum in Bologna. “According to this, the predatory dinosaurs gradually lost their little finger and then their ring finger. The three-fingered hand emerged from the rest, from which the bird's wing later emerged. "(PeerJ, 2018; doi: 10.7717 / peerj.5976)