How do people see life

Deaf-blind people: Understand each other without seeing or hearing

Hands and fingers are the most important means of communication for deafblind people. Because they can only communicate with each other by touch. In the absence of language and eye contact, the conversation is much more physical. Deaf-blind people speak to one another by touching their hands and can thus actively participate in life. 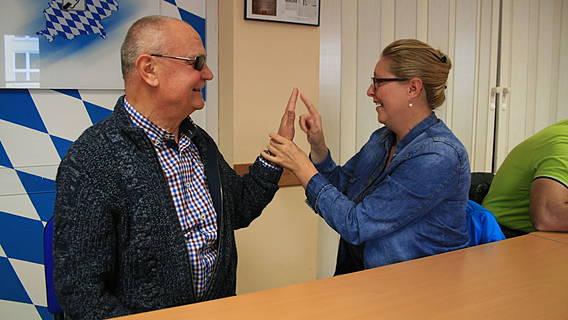 Malgorzeta Zabinski and Franz Kupka sit across from each other, constantly holding hands, hugging each other, and time and again she holds his left wrist tight with her left hand and taps the palm of his hand with her right index finger at tremendous speed.

While she is deaf and sees only minimally, he can neither hear nor see. The black sunglasses protect him from excessive brightness. The two meet regularly. This time they are guests of the “National Service for the Integration of Deaf-Blind and Hearing Impaired People in Bavaria” (ITM). This state-funded institution, unique in Germany, organizes meetings for people with hearing impairments. ITM employees Britta Achterkamp, ​​Thomas Asam and Nicole Hauf organize visits to the zoo, during which not only goats and sheep, but also spiders and snakes are touched. They organize “culinary trips” with the information and service center of the Bavarian State Association for the Welfare of the Hearing Impaired. The aim of all activities is to appeal to the functioning senses of feeling, smelling and tasting.

Language for deaf-blind people: tip of the thumb = A

On this afternoon with coffee and cake everyone exchanged vividly: Sign language interpreters translate for those who still have poor eyesight, with FM systems (wireless sound transmission) people with residual hearing and those who can no longer communicate can hear "lorms". This is a form of communication for the deaf-blind. The “speaking” touches the palm of the “reading”. Individual fingers and parts of the hand are assigned certain letters. For example, touching the tip of the thumb means “A”, the tip of the index finger means “E” and a circle on the palm of the hand means “S”. Hieronymus Lorm, who himself was visually impaired, developed this language in 1881.

Franz Kupka has been dependent on Lormen for 15 years. In 1945 he was born deaf. At the age of 28 he had visual problems. For a long time he hoped that these would only be temporary. But then he was diagnosed with "Usher Syndrome". Many deaf-blind people suffer from the hereditary disease that links deafness with the eye disease retinopathia pigmentosis.

After deafblindness was little known for a long time, this disability is receiving increasing attention. In the meantime there is a special mark “Tbl”, and the qualification of interpreters for the hearing-impaired is promoted.

Franz Kupka continues to fight for recognition with great commitment. After having been head of the self-help group for deaf-blind people in Bavaria for over 30 years, he now wants to found his own association throughout Bavaria.